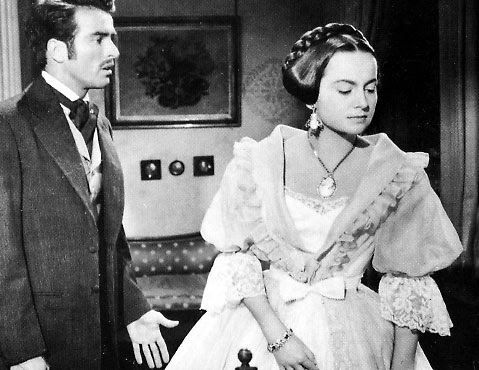 The Heiress is a 1947 Broadway theatre production which became a 1949 film. Both play and film were adapted by Augustus Goetz and Ruth Goetz from Henry James' Washington Square. The story concerns two young people who plan to marry against the wishes of the girl's father.

Wendy Hiller originated the role of Catherine on Broadway in 1947; in the West End, Catherine was played by Peggy Ashcroft. The film stars Olivia de Havilland, Montgomery Clift, Ralph Richardson and Miriam Hopkins.

Catherine Sloper (Olivia de Havilland), the heiress of the title is a plain, painfully shy girl whose emotionally detached father (Ralph Richardson) makes no secret of his disappointment in her. When she meets the charming Morris Townsend (Montgomery Clift), she is immediately taken by the attention that he lavishes upon her - attention she so desperately seeks from her father. Catherine falls madly in love with Morris and they plan to marry.

Catherine's father believes that Morris is only courting Catherine to get at her inheritance. He threatens to disinherit her if she marries him. Catherine does not care, and plans to elope with Morris but not before telling him about her disinheritance. On the night they were to elope, Catherine waits at home with pitiful eagerness for Morris to come and take her away...but he never arrives.

Catherine is heartbroken. A few years pass and her father dies, leaving her his entire estate. Morris eventually returns, penniless, his good looks marred by a rather sinister mustache. Again he professes his love for Catherine, claiming that he left her behind because he could not bear to see her destitute. Catherine, wincing as he embraces her, pretends to forgive him and tells him she still wants to elope as they originally planned. He promises to come back that night for her, and she tells him she'll start packing her bags.

When Morris returns, Catherine takes her revenge. She calmly asks the maid to bolt the door, leaving Morris locked outside, shouting her name. Her aunt (Miriam Hopkins) asks her how she can be so cruel. In a celebrated quote, Catherine responds,Yes, I can be very cruel. I have been taught by masters! The film fades out, with Catherine silently ascending the stairs while Morris' despairing cries echo unanswered through the darkness.