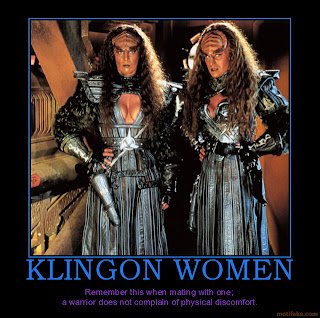 Original Text:
The closest depiction of two Klingons engaged in a mating ritual on screen is that of Worf and K'Ehleyr inTNG: "The Emissary".
This scene obviously only consisted of foreplay. It can only be assumed that the actual act of Klingon sexual congress is similar to the Human act.
This act resulted in the conception of Alexander.

Original Text:
Writer Ronald D. Moore stated that he " carefully crafted the marriage ceremony to emphasize the importance of women in Klingon society: the ceremony is conducted by a woman, and the story of the first two Klingon hearts describes them as each bringing different components to a union, with neither one having dominion over the other. "

With fire and steel did the gods forge the Klingon heart.
So fiercely did it beat, so loud was the sound, that the gods cried out,
'On this day we have brought forth the strongest heart in all the heavens.
None can stand before it without trembling at its strength.
' But then the Klingon heart weakened, its steady rhythm faltered and the gods said,
'Why do you weaken so?
We have made you the strongest in all of creation.'
And the heart said...
'I am alone.'
And the gods knew that they had erred.
So they went back to their forge and brought forth another heart.
But the second heart beat stronger than the first, and the first was jealous of its power.
Fortunately, the second heart was tempered by wisdom.
'If we join together, no force can stop us.'
And when the two hearts began to beat together, they filled the heavens with a terrible sound.
For the first time, the gods knew fear.
They tried to flee, but it was too late.
The Klingon hearts destroyed the gods who created them and turned the heavens to ashes.
To this very day, no one can oppose the beating of two Klingon hearts."