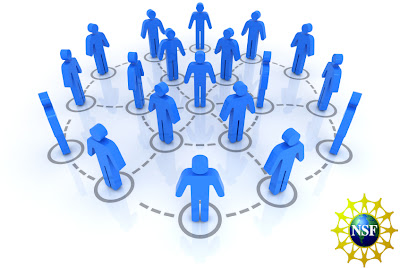 How Many Clients does it take to win and election? Estimating the Size and
Structure of Political Networks in Argentina and Chile

Abstract: Critical for our understanding of clientelism is to measure the size and structure of political networks.
That is, to measure whether parties have a large enough supply of patrons, bureaucrats, activists, and volunteers, which would allow party  leaders to properly invest particularistic resources among adequately chosen voters.
In this article we take advantage of new developments in network analysis to measurethe size of hard to count populations and to explore network structure in survey data.
Using information about the ideological and physical proximity of voters to political networks, we estimate individual level vote choices in Argentina and Chile.
First Draft (Do Not Cite), October 2007; hacer clic aquí.

pre–World War II
Academic research in science and engineering is not considered a federal responsibility; almost all support comes from private contributions and charitable foundations. Governmental research into science and technology was largely uncoordinated; military research is compartmentalized to the point where different branches are often working on the same subject without realizing it.

World War II
There is a growing awareness that America's military capability owes a great deal to the nation's strength in science and engineering. Congress considers several proposals to provide federal support for research in these fields. Separately, President Franklin D. Roosevelt sponsors the creation of several organizations to coordinate federal funding of science for the purposes of war, including the National Defense Research Committee and the Office of Scientific Research and Development.

1945
Vannevar Bush—head of the Office of Scientific Research and Development, intimately connected with the Manhattan Project, and personal acquaintance of the President—was asked by President Roosevelt in 1944 to write a report on what should be done in the postwar to further foster government commitment to science and technology. Bush issued his report to President Harry S. Truman in July 1945, entitled Science—The Endless Frontier. The report lays out a strong case for having the federal government fund scientific research, arguing that the nation would reap rich dividends in the form of better health care, a more vigorous economy, and a stronger national defense. The report also proposes creating a new federal agency, the "National Research Foundation," to administer this effort.

1945–1950
Although there is broad agreement in Washington with the principle of federal support for science, there is far less agreement on exactly how that effort should be organized and managed. Thrashing out a consensus requires five years of negotiation and compromise.[16]

1950
On May 10, President Truman signs Public Law 507, creating the National Science Foundation. The act provides for a National Science Board of twenty-four part-time members and a director as chief executive officer, all appointed by the president.

1951
In early March, Truman nominates Alan T. Waterman, the chief scientist at the Office of Naval Research, to become the first Director of the fledgling agency. With the Korean War underway, money is tight: the agency's initial budget is just $151,000.

1952
After moving its administrative offices twice, NSF begins its first full year of operations with an appropriation from Congress of just $3.5 million, a figure far less the almost $33.5 million requested. Twenty-eight research grants are awarded.

1957
On October 5, the Soviet Union orbits Sputnik 1, the first ever man-made satellite. The successful rocket launch forces a national self-appraisal that questions American education, scientific, technical and industrial strength. For 1958, Congress increases the NSF appropriation to $40 million. By 1968, the NSF budget will stand at nearly $500 million.

1958
The NSF selects Kitt Peak, near Tucson, Arizona, as the site of the first national observatory, a research center that would make state-of-the-art telescopes available to every astronomer in the nation. (Prior to this time, there was no equal access; major research telescopes were privately funded, and were available only to the astronomers who taught at the universities that ran them.) Today, that idea has expanded to encompass the National Optical Astronomy Observatory, the National Radio Astronomy Observatory, the National Solar Observatory, the Gemini Observatory and the Arecibo Observatory, all of which are funded in whole or in part by NSF. Along the way, moreover, the NSF's astronomy program has forged a close working relationship with that of NASA, which was also founded in 1958: just as NASA has responsibility for the U.S. effort in space-based astronomy, the NSF provides virtually all the U.S. federal support for ground-based astronomy.

1959
The United States and other nations operating in Antarctica conclude a treaty that reserves the continent for peaceful and scientific research. Shortly thereafter, a presidential directive based on the treaty gives the NSF the responsibility for virtually all U.S. operations and research on the continent; the U.S. Antarctic Program continues to this day.

1960
Emphasis on international scientific and technological competition further accelerates NSF growth. The foundation starts the Institutional Support Program, a capital funding program designed to build a research infrastructure among American universities; it will be the single largest beneficiary of NSF budget growth in the 1960s. The NSF's appropriation is $152.7 million; 2,000 grants are made.

1968
The Deep Sea Drilling Project begins. Over the years, the project reveals much new evidence about the concepts of continental drift, sea floor spreading and the general usefulness of the ocean basins. The program also becomes a model of international cooperation as several foreign countries join the operation.

1972
The NSF takes over management of twelve interdisciplinary materials research laboratories from the Defense Department's Advanced Research Projects Agency (DARPA). These university-based laboratories had taken a more integrated approach than did most academic departments at the time, encouraging physicists, chemists, engineers, and metallurgists to cross departmental boundaries and use systems approaches to attack complex problems of materials synthesis or processing. The NSF begins to expand these laboratories into a nationwide network of Materials Research Science and Engineering Centers.

1972
The NSF launched the biennial Science & Engineering Indicators report to the President of the United States and U.S. Congress. Founded in 1968 as a research institution in bibliometrics and patent analytics ipIQ dba The Patent Board has provided patent indicators and science literature analysis since the initial report in 1972.

1977
The first "Internet" is developed. This interconnection of unrelated networks is run by DARPA. Over the next decade, increasing NSF involvement leads to a three-tiered system of internetworks managed by a mix of universities, nonprofit organizations and government agencies. By the mid-1980s, primary financial support for the growing project is assumed by the NSF.[17]

1983
The agency budget tops $1 billion for the first time. Major increases in the nation's research budget are proposed as the country recognizes the importance of research in science and technology, as well as education. A separate appropriation is established for the U.S. Antarctic Program. The NSF receives more than 27,000 proposals and funds more than 12,000 of them.

1985
In November, the NSF delivers ozone sensors, along with balloons and helium, to researchers at the South Pole so they can measure stratospheric ozone loss. The action is taken in response to findings made in May of that year, indicating a steep drop in ozone over a period of several years. The Internet project, now known as NSFNET, continues.

1990
The NSF's appropriation passes $2 billion for the first time.

1990s
NSF funds the development of several curricula based on the NCTM standards, devised by the National Council of Teachers of Mathematics. These standards are widely adopted by school districts during the subsequent decade. However, in what newspapers such as the Wall Street Journal later call the "math wars", organizations such as Mathematically Correct complain that some elementary texts based on the standards, including Mathland, have almost entirely abandoned any instruction of traditional arithmetic in favor of cutting, coloring, pasting, and writing. During that debate, NSF is both lauded and criticized for favoring the standards.

1991
In March, the NSFNET acceptable use policy is altered to allow commercial traffic. By 1995, with the private, commercial market thriving, NSF decommissions the NSFNET, allowing for public use of the Internet.

1993
Students and staff working at the NSF-supported National Center for Supercomputing Applications (NCSA) at the University of Illinois, Urbana-Champaign, develop Mosaic, the first freely available browser to allow World Wide Web pages that include both graphics and text. Within 18 months, NCSA Mosaic becomes the Web browser of choice for more than a million users, and sets off an exponential growth in the number of Web users.

1994
NSF, together with DARPA and NASA, launches the Digital Library Initiative. One of the first six grants goes to Stanford University, where two graduate students, Larry Page and Sergey Brin, begin to develop a search engine that uses the links between Web pages as a ranking method. They will later commercialize their search engine under the name Google.

1996
NSF-funded research establishes beyond doubt that the chemistry of the atmosphere above Antarctica is grossly abnormal and that levels of key chlorine compounds are greatly elevated. During two months of intense work, NSF researchers learn most of what we know today about the ozone hole.

1998
Two independent teams of NSF-supported astronomers discover that the expansion of the universe is actually speeding up, as if some previously unknown force, now known as dark energy, is driving the galaxies apart at an ever increasing rate.

2000
NSF joins with other federal agencies in the National Nanotechnology Initiative, dedicated to the understanding and control of matter at the atomic and molecular scale. Today, NSF's roughly $300 million annual investment in nanotechnology research is still one of the largest in the 23-agency initiative.

2001
NSF's appropriation passes $4 billion.
The NSF's Survey of Public Attitudes Toward and Understanding of Science and Technology reveals that the public has a positive attitude toward science but a poor understanding of it.[18]

Contra cara teutona del “Panarabismo” de TE Lawrence y la “Proclamación de Bagdad”; “…our armies do not come into your cities and lands as conquerors or enemies, but as liberators…”

The most interesting result displayed in Tables 2 and 3 is that whereas political parties in Chile have relatively similar numbers of political activists, in Argentina there are very significant difference between the size of the Peronist networks (reflecting its operational capacity)  and that of the other parties.

In effect, the number of Peronists activists  in Argentina is two thirds larger than its closest follower, the Radicals.

The PRO, ARI and other provincial parties together make up only 0.2% of the population.

All political activists in Argentina add up to 1.4% of the population while  in Chile the most important political parties combine for 1.2%.

However, in contrast to the very dramatic differences in the share of activists held by each  Argentine political party, the Chilean political parties have relatively equal shares of activists, with the Socialist Party concentrating  0.356%, closely followed by the Christian Democrats with 0.299%, the PPD with 0.2%, the UDI with 0.199, and the smaller RN with 0.147%.

More dramatic differences are apparent when reporting the total numbers of activists in Table 3, to some extent because Argentina has more than twice the population of Chile.

The estimated Peronist core of 290,930 activists is almost six times larger than the 53,880 activists of the Chilean Socialist Party.

It is important to note, however, that Argentina’s federal constitution provides for a considerably larger number of elective posts, including not only seats distributed in multiple municipal, provincial, and federal elections but also a large number of candidates running in the primaries for each party in those different categories.

Considering that the political crisis of 2001 practically halved the UCR vote, it is remarkable that the size of the UCR network of activists is larger than that of any party in Chile even when controlling for the differences in population.

Dixit, Avinash, and John Londregan. 1996. “The determinants of success of Special Interests in Redistributive Politics,” Journal of Politics 58 (November): 1132-55.

Tian Zheng, Matthew Salganik, and Andrew Gelman, 2006, "How many people do you know in prison?: using overdispersion in count data  to estimate social structure in networks", Journal of the American Statistical Association, Vol.101, N0. 474: p.409-23