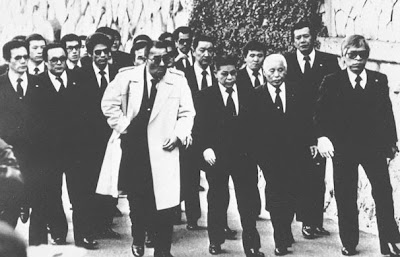 Even ’s infamous mafia groups are helping out with the relief efforts and showing a strain of civic duty.

Jake Adelstein reports on why the police don’t want you to know about it.

The worst of times sometimes brings out the best in people, even in ’s “losers” a.k.a. the Japanese mafia, the yakuza.

Hours after the first shock waves hit, two of the largest crime groups went into action, opening their offices to those stranded in Tokyo, and shipping food, water, and blankets to the devastated areas in two-ton trucks and whatever vehicles they could get moving.

The day after the earthquake the Inagawa-kai (the third largest organized crime group in Japan which was founded in 1948) sent twenty-five four-ton trucks filled with paper diapers, instant ramen, batteries, flashlights, drinks, and the essentials of daily life to the Tohoku region.

An executive in Sumiyoshi-kai, the second-largest crime group, even offered refuge to members of the foreign community—something unheard of in a still slightly xenophobic nation, especially amongst the right-wing yakuza.

The Yamaguchi-gumi, ’s largest crime group, under the leadership of Tadashi Irie, has also opened its offices across the country to the public and been sending truckloads of supplies, but very quietly and without any fanfare.

A bit of background: has 80,000 members belonging to these criminal organizations, which the police label shiteiboryokudan or literally “designated violent groups”; membership is not illegal although the police regulate their activities, much the way the SEC regulates Goldman Sachs.

They call themselves “yakuza.”

The word comes from a losing hand in traditional Japanese gambling: 8 (ya) 9 (ku) 3(za) which adds up to 20, and is a useless hand.

Thus to be a yakuza is to be “a loser.” It’s a self-effacing term. They yakuza don’t call themselves “violent groups.”

They exist out in the open; they have offices, business cards, fan magazines.

The three major groups, the

Ninkyo(do), according to yakuza historical scholars is a philosophy that values humanity, justice, and duty and that forbids one from watching others suffer or be troubled without doing anything about it.

Believers of “the way” are expected to put their own lives on the line and sacrifice themselves to help the weak and the troubled.

The yakuza often simplify it as “to help the weak and fight the strong,” in theory. In practice, the film director Itami Juzo, who was attacked by members of the Yamaguchi-gumi Goto-gumi because of his films depicting them harshly, said “the yakuza are all about exploiting the weak and disadvantaged in society, and run away from anyone strong enough to stand up to them and their exploitive extortion.”

He was primarily correct, I think. However, sometimes, like today in , they live up to their original values.

Of course, most yakuza are just tribal sociopaths who merely pay lip service to the words.

But in times like this every helping hand is welcome, and maybe, maybe for a few weeks, both the police and the yakuza can declare a peace treaty and work together to save lives and ensure the safety of the people of .

To some extent, the police have even given their tacit support to the yakuza aid efforts.

That’s the spirit of ninkyodo.

It’s also the spirit of many of the Japanese people.

It is why I have no doubts that will weather this crisis and come back stronger than ever.

Naoya Kaneko, the deceased Sumiyoshi-kai boss who was a friend and a source, once said, “In times of crisis, you learn the measure of a man.”

To understand the real meaning of that you have to understand how the generally male-dominated and sexist yakuza define “a man.”

The core of that is giri, a word that can be translated many different ways but which I interpret to mean: reciprocity.

Today, the Japanese people and even the yakuza are measuring up very well to that standard of behavior.

Jake Adelstein was a reporter for the Yomiuri Shinbun, Japan’s largest newspaper, from 1993 to 2005.

From 2006 to 2007 he was the chief investigator for a State Department-sponsored study of human trafficking in .

Considered one of the foremost experts on organized crime in , he works as a writer and consultant in and the .

He is also the public relations director for the Washington, D.C.-based Polaris Project , which combats human trafficking and the exploitation of women and children in the sex trade.

He is the author of Tokyo Vice: An American Reporter on the Police Beat in Japan (Vintange).