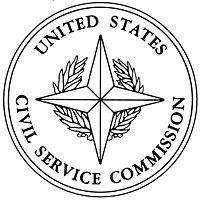 In the United States, the civil service was established in 1872. The Federal Civil Service is defined as "all appointive positions in the executive, judicial, and legislative branches of the Government of the United States, except positions in the uniformed services." (5 U.S.C. § 2101).[1] In the early 19th century, government jobs were held at the pleasure of the president—a person could be fired at any time. The spoils system meant that jobs were used to support the political parties. This was changed in slow stages by the Pendleton Civil Service Reform Act of 1883 and subsequent laws. By 1909, almost two-thirds of the U.S. federal work force was appointed based on merit, that is, qualifications measured by tests. Certain senior civil service positions, including some heads of diplomatic missions and executive agencies are filled by political appointees. Under the Hatch Act of 1939, civil servants are not allowed to engage in political activities while performing their duties.

U.S. state and local government entities often have competitive civil service systems that are modeled on the national system, in varying degrees.

Employees in the civil services work under one of the independent agencies or one of the 15 executive departments.

In addition to departments, there are a number of staff organizations grouped into the Executive Office of the President. These include the White House staff, theNational Security Council, the Office of Management and Budget, the Council of Economic Advisers, the Office of the U.S. Trade Representative, the Office of National Drug Control Policy and the Office of Science and Technology Policy.

There are also independent agencies such as the United States Postal Service, the National Aeronautics and Space Administration (NASA), the Central Intelligence Agency (CIA), the Environmental Protection Agency (EPA), and the United States Agency for International Development (USAID). In addition, there are government-owned corporations such as the Federal Deposit Insurance Corporation (FDIC) and the National Railroad Passenger Corporation.[2]

As of January 2007, the Federal Government, excluding the Postal Service, employed about 1.8 million civilian workers. The Federal Government is the nation’s single largest employer. Although most federal agencies are based in the Washington, D.C. region, only about 16% (or about 288,000) of the federal government workforce is employed in this region.[3]

There are over 1,300 federal government agencies.[4]